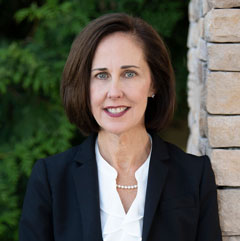 Megan is an advisor and consultant to educational institution clients with a focus on Title IX compliance. Megan’s approach focuses on providing practical, reasoned advice to universities, colleges, and schools who are implementing change and bringing her legal, business, and education expertise to unique challenges.
Megan’s background includes working as Title IX Coordinator at Palo Alto Unified School District (PAUSD) and Notre Dame of Maryland University. Megan recently served as Interim Title IX Coordinator for Berkeley Unified School District and currently serves as Interim Title IX Coordinator for Los Gatos-Saratoga Union High School District. She has also served as in-house counsel, faculty member, and graduate program director. Aside from these in-house positions, Megan also has provided risk and litigation management counseling to institutions, developed internal policies and procedures for education clients, and designed customized training programs for schools across the country.
Megan holds a Bachelor of Arts degree from Loyola University, a Juris Doctor from Delaware Law School, and a Master of Business degree from University of Maryland. She also holds certificates in Diversity and Inclusion from Cornell University and Mentor Coaching through the Coach Training Alliance, an International Coach Federation (ICF) program. 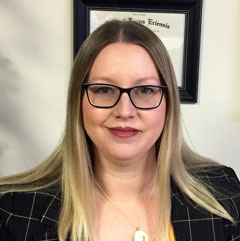 April began her career as an equal employment opportunity and affirmative action attorney in 2014 and has ample experience in compliance focused anti-discrimination matters, including both Title VII and Title IX compliance training, litigation and investigations. April conducted hundreds of Title IX and related investigations while employed for nearly four years at a large state institution. She has also represented many employers and institutions during various Federal government program reviews and compliance reviews for favorable outcomes. April’s unique background in multiple areas of discrimination law and regulatory compliance, as well as her hands-on experience working in Title IX at Kent State University, result in a dynamic combination of substantial industry knowledge, trauma-informed approaches to her investigations.
April earned her B.S. in Accounting, in 2008, from Lake Erie College in Painesville, Ohio, where she was a member of the ICTA Equestrian Team. She graduated from the University of Akron School of Law in 2014. She served as a Compliance Investigator and Deputy Title IX Coordinator at Kent State University from 2015-2018, and has worked in private practice since early 2019. April and her husband, Justin, have two children, Violet (5) and Trevor (3). In her free time, April enjoys equestrian pursuits and is also an avid recreational kayaker.